It’s time to get METAL! Brutal Legend play through. 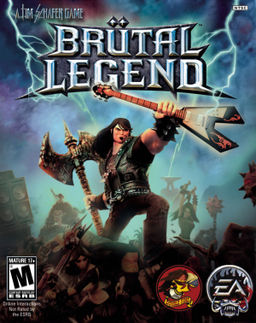 Brutal Legend has been a console exclusive for a few years now but it has finally arrived on the PC! As a guitar player and a gamer. This game is a must play, action adventure style game play with sick old school metal combined with the story line, simply cannot be passed up.

Here’s part 1 of the play through, I don’t know at what rate I will have all of the parts up or how far i’ll get through the game, so subscribe to my youtube channel if you want to get auto updates on when new parts of the gameplay goes up.

Jack Black who is part of Tenacious D, Po from Kung Fu Panda and various other movies like The Pick of Destiny. Voices Eddie Riggs, a “roadie”, probably a job taken for granted but a very important part of any major band. What is even better is that the character literally looks like a buffed up Jack Black. Hilariously awesome.

I also can’t help but mention the incredibly lovely and awesome Voice Actress Jennifer Hale. As a gamer, her voice acting career is legendary. Chances are if you don’t know her by name, you have heard her voice at one point or another. Either in a game or on a animated show. Just to name a few off the top of my head..

I’m in for an epicly good metal time with Brutal Legend. If you’ve got a suggestion of a game I should check out, either to play and record or just play. Leave me a comment below!